Blogs and Articles from The Body of Believers at Bombay Christian Fellowship seeking to be a pure testimony for Jesus in their respective roles that God has called them to live out.

A question that needs to be answered – by Rowena Thomas

If God is a God of Justice, how then can dying to self imply that when I am treated unjustly or I see anybody else being treated unjustly I should simply keep quiet and allow God to fight for me.  Would this be what Jesus would do?

Scriptures to refer to:

Do not answer a fool according to his folly or you will also be like him.  Answer a fool as his folly deserves that he will not be wise in his own eyes.

Proverbs 3:7 defines being wise in our own eyes as ‘Not fearing the Lord and so not turning away from evil.’

To show partiality in judgment is not good.  He who says to the wicked ’You are righteous’, peoples will curse Him, Nations will abhor him but to those who rebuke the wicked will be delight and a good blessing will come upon them.

Eccle7:18 It is good that you grasp one thing and not let go of the other, for the one who fears God comes for the with both of them.

Eccle3:7A time to be silent and a time to speak. 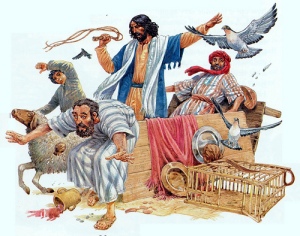 From the above scriptures, by which Jesus walked, we see from the Gospels that Jesus was neither silent always when meted out with injustice or seeing others unjustly treated nor was he always answering back.

Ironically, the very person who exhorts us in Mathew 5:39 not to resist an evil person, but whoever strikes you on your right cheek, turn the other to him also…., does not do this in John 18; 19-24, even when questioned by the High Priest. However, his motive for speaking thus in John 18 was not to escape going to the cross, because He already knew that the Father’s will for Him was to go to the cross, but He spoke thus only to speak conviction to the heart of those around and enable them to have a chance to repent and not because He wanted to save himself.  Therefore, Mathew 5:39 begins with, ‘Do not resist an evil person.’  So we must make sure that the one doing evil towards us understands that He is doing evil and when we find that He still wants to continue being evil, then we must resist him no more.  Just as James 5:6 says, ’You have condemned and put to death the righteous man and He does not resist you.”

Many times, people who are doing evil to us don’t think or feel that they are doing evil, but feel that they are right in doing the wrong thing or in other words that they are wise in their own eyes. This is because their consciences are dulled.  It is towards such people that we should not immediately offer the other cheek, but speak conviction to their hearts, by words that do not spring forth from bitterness, jealousy and selfish ambition, but words and deeds that are spoken and done in the gentleness of wisdom. (Very often, this is where we fail, because we speak harsh words and angry words which we should repent of)

However, if we do speak graciously and still find that the person does not see his wickedness and does not repent, then we should resist him no longer and show the other cheek, praying so as to bless those who curse us, and that God may forgive them and lead them to repentance.

In do this, we will not answer a fool according to his folly and so become like him i.e sin as he is sinning, but rather we will have answered him as his folly deserves so that he will not be wise in his own eyes.  This is what Jesus did in John 18:19-24 and He is our best example who enables us to strike a proper balance between Mathew 5:39 and John 18:19-24 coupled with the other verses listed above.

To attain to such a balanced life, we need to be obedient students who study God’s Word diligently and handle it accurately so that when the devil says to us ’It is written..’ we can like Jesus wisely point out that, ‘It is also written…’ and thus walk as Jesus did.  Hallelujah for such a glorious Gospel!

Proverbs 25:11 says ‘Like apples of gold in settings of silver is a word spoken in right circumstances.’

Vs 12:Like an earring of gold and an ornament of fine gold is a wise reprove to a listening ear.

May the Lord give us grace to live such a balanced Christian life and wholeheartedly follow in the footsteps of our Lord.

I am a homemaker and seek to glorify God through simple obedience to His Word in every area of my life.
View all posts by Rowena Thomas →

This entry was posted on October 20, 2016 by Rowena Thomas in Basic Truths, Uncategorized and tagged Christian attitude to injustice., Justice, Loving your enemies, Resisting evil, Revenge, Turn the other cheek.

Trust the LORD in difficulties! – by Tesfom Malake

A question that needs to be answered – by Rowena Thomas

The Principle of Seedtime and Harvest – by Tesfome Melake

Renewing our minds – by Renee Melek

Overcoming The Spirit of the Antichrist – by Rowena Thomas